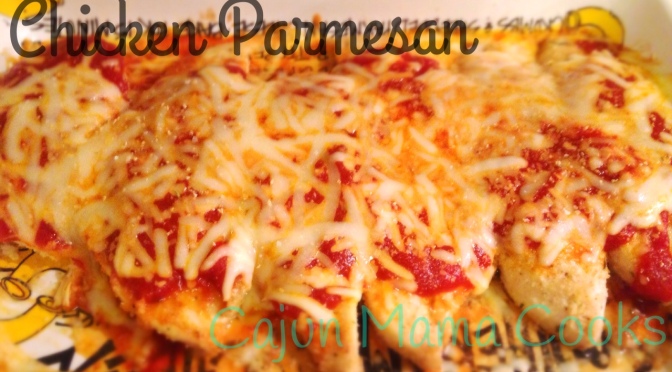 So lately I have been having the envie (said “ah-vee”) or as some say, craving, for chicken Parmesan.  MMMM…I love chicken parm.   Growing up in a double Cajun household, both parents from Marksville, Blue Town and Broulliette respectively, that is a phrase I heard frequently.  My dad would say “Hey Bern, I’ve got an envie for pork stew”….or it might have been “a mess of grillades”.  Funny how those phrases sound so familiar to me but to someone else, it sounds strange.  In the house I grew up in, I was never lucky enough for one of my parents to crave chicken parmesan.  Ha ha!  That would have been too normal.  Red beans and rice or spaghetti and meatballs was about as normal as it got.  When I was younger, I was never embarrassed of our Cajun roots, but I did not cling to them like I do now.  Maybe it is being a Cajun Catholic transplant among all these North Louisianians or as they call them in Alex. or below…rednecks.  (sorry guys, but it is true…and I am one now and it is all good.  My dad calls my kids little coon necks.  Mix between coonass and rednecks.  He is a clever guy, my dad.)   The things that I cling to and recall now with extreme pride now are things that were commonplace growing up.  They didn’t seem strange until someone else said it was.  For instance, when I was probably in 2nd grade, my family was going to a boucherie at my grandparents’ house.  That was a normal occurrence in our family.  My parents got really excited about it.  For those who do not know, this is the event where they kill a pig that has been raised specifically for this purpose and then have a big get together and make boudin, cracklins, grillades, hog head cheese, and so on.  A friend from school had spent the night with me and she came along.  We walk in my grandfather’s shop, where they were making the boudin, and she screams.  Loudly.  I am pretty sure she mentioned something about the movie Carrie…I can’t be sure.  7 year old girls can be brutal. Both of my grandmother’s, Momou and Momee, were in there making boudin.  Now, I apologize for being graphic and this may gross some of ya’ll out, but both of their hands were elbow deep in a bowl of pig blood.  That is what they do to make the red boudin.  That’s right.  It has blood in it.  I only eat the white, but many of my family members love the red.  It is considered a delicacy.  Now, see, had I had a set of grandparents that did not live in Avoyelles or were not so similar in ways to the other set, I might have realized this was different.  But that was all I knew.  It was completely normal to me.  I found that little incident a little embarrassing at that time, but it did not take long for me to embrace my Cajun roots with pride.  I love everything about it.  Even the not so pretty.  Another story…I distinctly remember Momou making chicken fricassee  or smothered chicken with the chicken feet in the pot.  I remember it striking me as kind of off, but not really, and I never asked.  That is just what we do.  I didn’t always  appreciate all that I was privvy to growing up in a double Cajun household, but now, oh now, I feel lucky.  I feel those traditions and nuances steeped deep into my bones and find so much joy in being different.  It is what makes us who we are.  I named my youngest baby Lucas Mayeux…his middle name is my maiden name.  Of course, people name their kids after their maiden names all the time, but for me, it about more than a name.  It is what that name represents.  What it carries on.  I am no longer Aimee Marie Mayeux.  I am Aimee Mayeux Bowlin…I say it with pride.

So, maybe I was never lucky enough to have my parents crave Chicken Parm and cook it for me.  That is something I do now for myself.  What I crave even more is making sure that as many of those traditions and strange little things, words, details, that I grew up taking for granted are things that my children will come to know as second nature.  It may not happen in Avoyelles very often, but I determine if it is kept alive.  So around here, I get an envie for chicken Parm.  My kids don’t even ask what that means.  They know.  So it goes…bringing the past into the present and shaping it into something brand new to form what will be the future.  I better call my mama to see if she can cook me a mess of grillades when we go to Alex. I have an envie.  But for now, in case any of you get a craving for Chicken Parmesan, really good, not hard, not awfully bad for you, chicken Parm I have a great recipe right here for you.  Note:  I did not pick the recipe because it is a “skinny” version..it isn’t that skinny when you eat 2 helpings…lol!  I picked it because it looked like what I wanted.  Though…nothing wrong with a healthy version whenever possible, especially when it tastes AWESOME!!!  My kids…well 3 out of 4…loved it!  My oldest is a hard sell, tried it and said no thanks..he is not a big fan of cheese topped meals…with the exception of a burger or pizza.  But 3 out of 4 Cajun Kiddos cannot be wrong.

Baked Chicken Parmesan to satisfy the strongest of envies

4 chicken breasts, cut in half long ways (into strips or you can use 8 tenderloins)

1 cup marinara sauce (ya’ll…I used Ragu. That is what I had on hand.  My family does love Robert Newman’s marinara though)

Preheat oven to 450 degrees.  Spray a 9 x 13 inch baking dish with cooking spray.  Combine breadcrumbs and grated Parmesan in a plate together.  Using a basting brush, spread melted butter lightly over each side of the chicken pieces.  Now, press each chicken piece into the plate of breadcrumbs and flip it over to do the other side.  Do this with each piece individually.  When you are done, place each piece in greased baking dish.  Lightly spray a little more oil on top of the chicken and bake in preheated oven for 20 minutes.  Turn chicken over and bake for another 5 minutes.  Remove the baking dish from the oven.  Spoon the marinara or spaghetti sauce over the chicken.  Top with shredded cheese.  Return this to the oven and bake for another 5 minutes or so until cheese is nice and bubbly.  I served this on the side of some boiled angel hair pasta topped with some of the Ragu (this way my oldest pickier kid would not starve.  He was down with that.  A nice salad goes well on the side as does some garlic bread, if you really want to do it up!)  Enjoy!!

Having a Cajun grandmother literally rocks 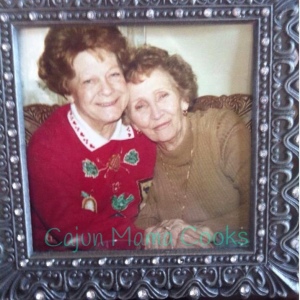 Momee and Momou (aka Beulah Mae and Narcille) were good friends.  How cool is that?

2 thoughts on “Chicken Parmesan and embracing the past”