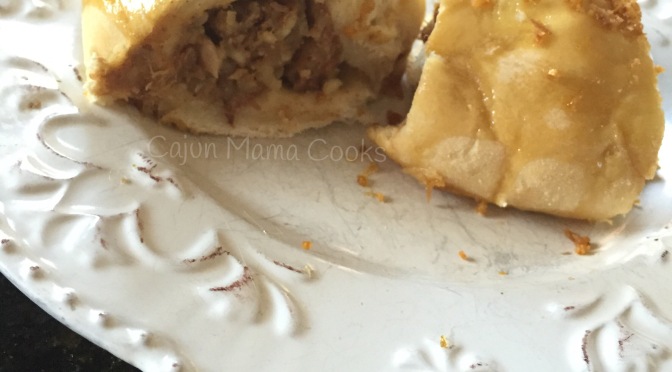 So about a week ago a picture came across my Facebook newsfeed about a boudin king cake. I was all like “hold the phone! A king cake with boudin in it?! Mama needs that!!” So I read the little blurb about the king cakes and the man behind the idea. So let me make sure you all hear me…this boudin king cake is NOT my idea. This is a copycat recipe that I came up with from the description that was in the blurb. I did email the guy asking how to buy one at cake@boudinlink.com as the article suggested. He responded quickly saying he could not handle all the orders and was turning the recipe over to a local bakery to make them. He said he would get back to me. Here is a link to the original article so you can read all about it http://www.theadvertiser.com/story/entertainment/food/2015/01/23/bites-boudin-king-cake-steens-cracklin-now-available/22218135/. But once you tempt a Cajun with boudin king cake, you cannot say “I will get back with you” because well…the damage has been done. It’s out there. Boudin. Inside of dough. It’s all I could think about. I was obsessed. So luck would have it, we were already headed down to Baton Rouge last weekend and my favorite place in the world is on the way. Yeah. Borques. We went on down to Baton Rouge because Big Daddy and several other Farm Bureau agents were being honored for being part of the 200 auto club. That’s an amazing achievement and I was happy to drop them kiddos off with their BB and Poppy in Alex. And head south. A night out at a hotel?! Sign me up! And we got to stay in the Renaissance Hotel that has the wallpaper in the bathroom I have been dying to get my hands on! No really, I have emailed the company who makes it. A friend stayed there and posted a pic on Facebook and I have been pining after it ever since. So I was stupid excited to stay there. Big daddy was like “yeah ok you want to stay here because of the wallpaper in the bathroom…whatever makes you happy babe.” (I know in his head he was like “I married a crazy lady.”) 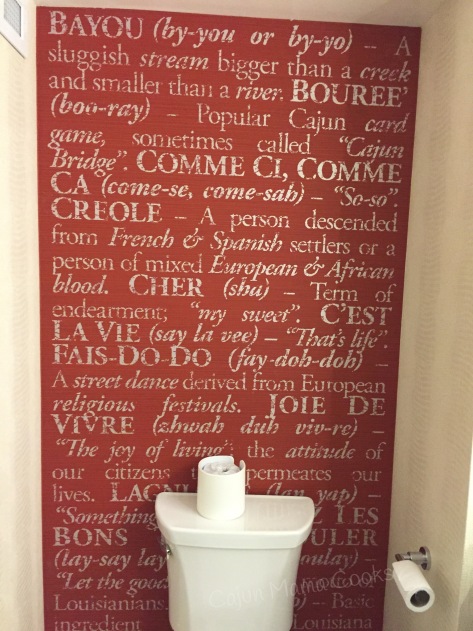 it has Cajun colloquialisms written on it! I need that! 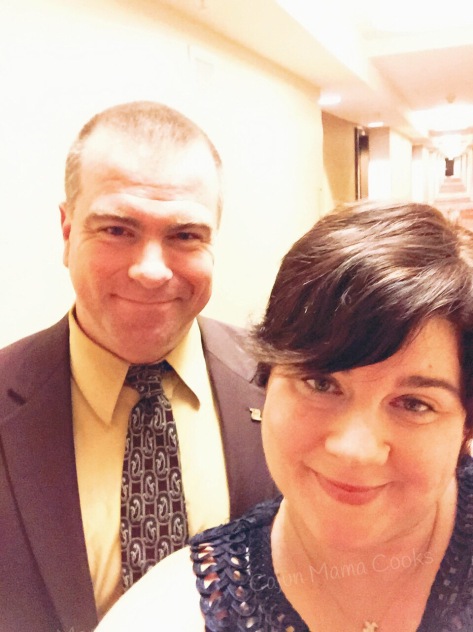 me and my main squeeze all gussied up to celebrate!! 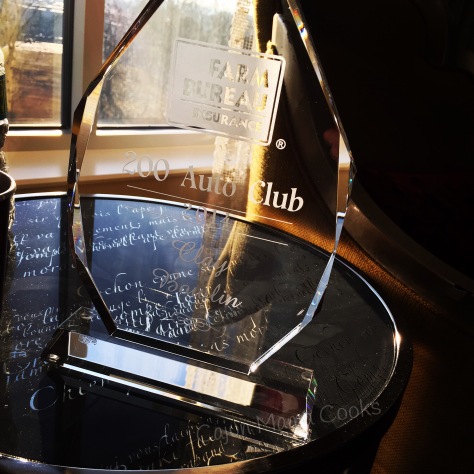 so proud of Big Daddy!! He works for a great company that rewards their agents for their hard work.

Ok…so we had our night out and then it was time to head home to have lunch at my mom and dad’s. Bernie made smothered chicken and rice and gravy. My favorite! My mom is an amazing cook I must say. So we headed north but on the way home Big Daddy surprised me with a detour through Port Barre to go to Borque’s Supermarket. You can check them out online at http://www.bourquespecialties.com. I truly love this place and it always feels a little like going home. Funny thing is, while we were there getting our boudin, I tell the woman at the counter that I was making a copycat boudin king cake and she says she had just answered a phone call from someone asking to order one. She said the person calling thought they had them. Lol!! But they do have boudin dip in case anyone wants to know that. That place is my Disneyland. 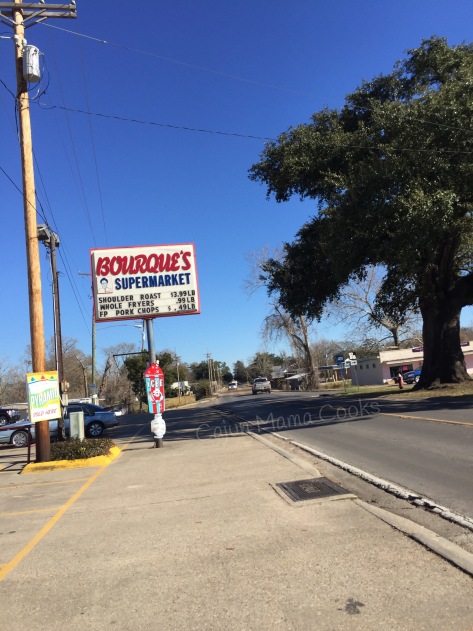 oh that’s a happy sight to me 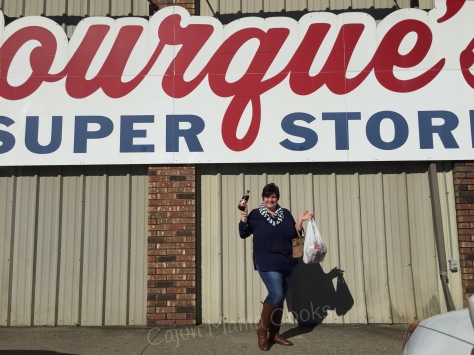 me with my loot. Some boudin for the king cake (and a few links for the road!), some cracklins and a Mr. Pibb. I was a happy girl!!

So we made it home with our posse in tow. I love getting away but I sure do love coming home, especially to these little faces… 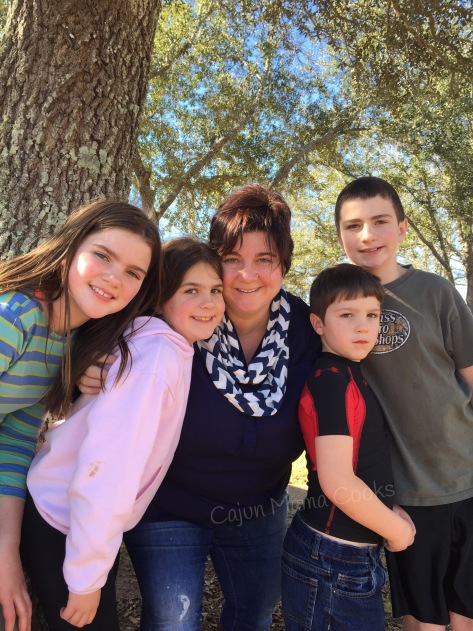 Ok…to get to this copycat recipe. The one I made was not hard and I am sure a very simplified version of the original. I do not claim that mine tastes like the original. I am just trying to figure out to get some since I could not order one. This recipe is not hard and requires few (though specialty) ingredients. I did not use steen’s syrup because I had some Lambert’s cane syrup from our summer trip to the beach. Also, I used frozen store bought dough because I don’t do yeast. If you have been reading along , you are aware that I summon a demon when I try to use Yeast.
This boudin king cake was off the chain and I can only imagine how the original recipe must taste. But…for a Cajun girl living in Shreveport, this recipe will definitely get me by. If I make another one, I will head to Bergeron’s Boudin and Cajun meats. We got one in Shreveport a few years ago and while my heart belongs to Borque’s, I am totally down with the saying “if you can’t be with the one you love, honey love the one your with…” Especially when it comes to boudin. They have cracklins too so that’s a good option for those too. If you are so inclined, try your hand at this culinary delicacy. It’s just in time for Mardi Gras season!! 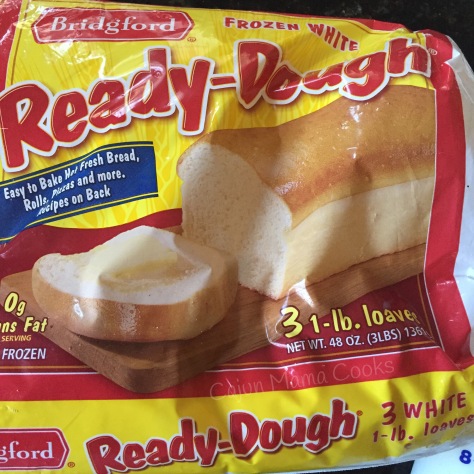 the dough I used

Night before, take the dough out of the freezer. Lay it out to defrost.

Ok…the next morning…preheat your oven to 350 degrees. Sprinkle a bit of flour on a rolling mat. 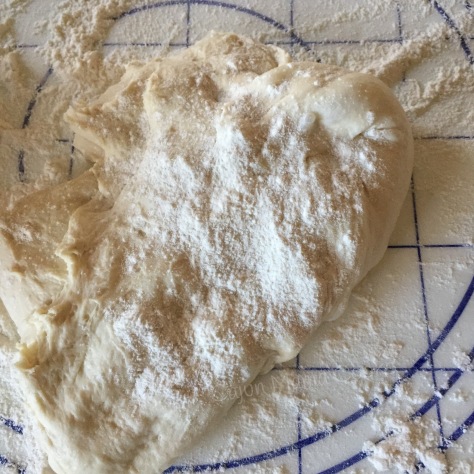 Next roll it out into a semi square. I was not picky here, I just kind of made sure it was big enough to encompass all the boudin. I would say about 6 ” by 12″ or round about. Cut a slit in the boudin and scoop out all the boudin. 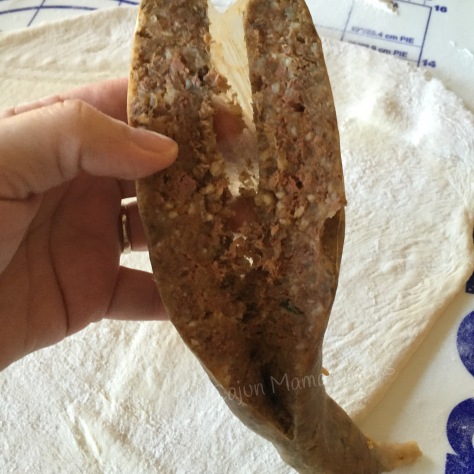 Lay all that boudin in the middle of your rolled out dough. I laid the boudin almost the length of the dough. Next time I will likely use a link or two more. 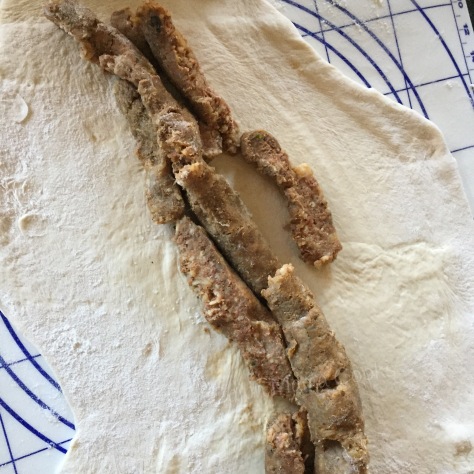 Now, bring the dough at the top toward the boudin. And then roll again. 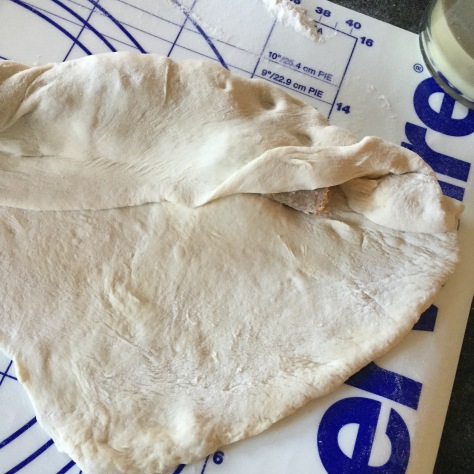 Roll towards you until you have a roll of dough. And then bend it into an almost closed circle. Like the shape of a King cake. 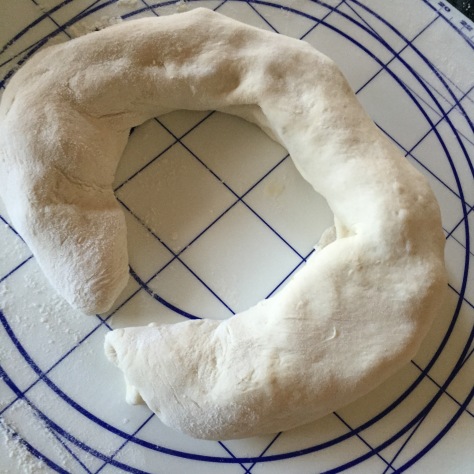 Next lay your king cake on a baking dish. I used by Pampered Chef baking stone and it did not disappoint. 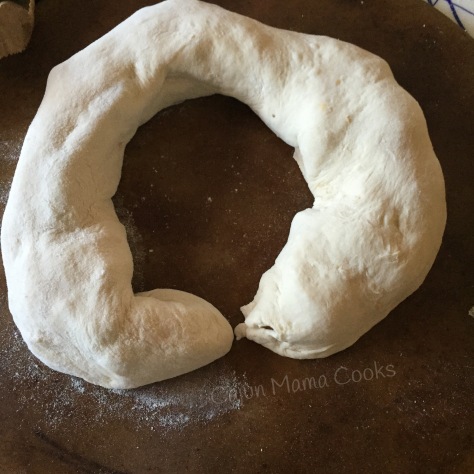 Slip it into your preheated oven and bake for about 20 minutes. While it is baking, place your cracklins in your food processor. I just tossed the whole cracklin (several of them) in the processor. It made a lot of noise but it did a good job at knocking the crumbly parts off and processing them into bits. I pulled the still solid parts out and then pulsed a few more times. You don’t need a bunch of the cracklin crumbs. 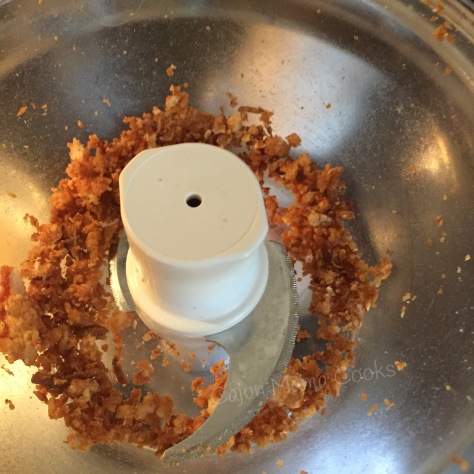 Now, after the first 20 minutes of cooking, pull your King cake out and baste with the cane syrup. Really coat it well. Your King cake is depending on you!! 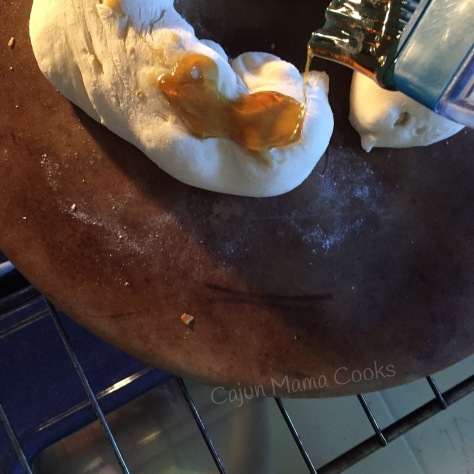 Bake another 20-30 minutes or until the King cake is well browned and that cane syrup is sticky and baked to a nice golden brown. Pull from oven and sprinkle those tasty cracklin crumbs all over the cake. Hot damn we did it!!! 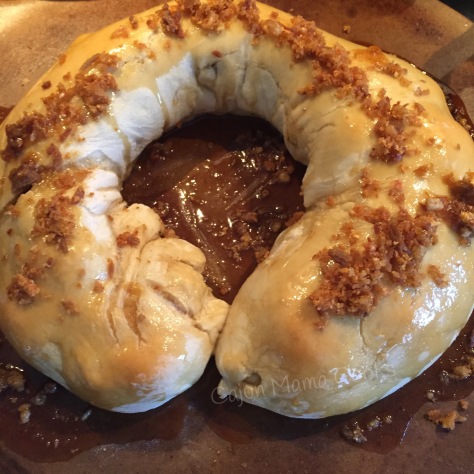