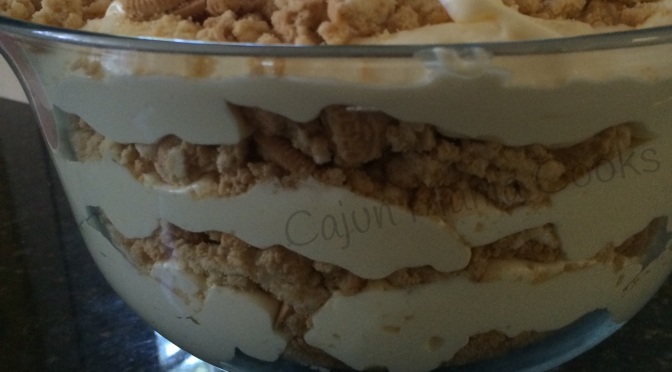 At some point in my childhood Momou discovered dirt cake. Such a novel idea at the time and she was the queen of the dirt cake. It’s funny because now dirt cake is far from a novel or creative idea. Since the invention of Pinterest, it’s hard these days to really come up with inventive ideas since it seems as if everything has been done. But back in 1990, when Momou discovered dirt cake, it was the bomb. I can recall either her or one of my aunts making it for a family gathering and serving the dirt cake in a clean flower pot with gummy worms sticking out of the top. Talk about impressive. I bet money that Momou would be a Pinterest queen if she was shown how to use it. And I bet if given the chance, she would whip up a mean dirt cake for her fellow nursing home residents. Sister can work it!! So this dirt cake is just a slight variation on the typical dirt cake. It uses golden Oreos instead of regular ones. With the recent introduction of caramel apple Oreos and pumpkin spice Oreos (which I still can’t find)…you could make this a Halloween dirt cake and really take it over the top. I am thinking food coloring, tiny tomb stones and little skeleton heads all over the top. The possibilities are endless!! This dirt cake is an excellent birthday cake alternative for my friends who have kiddos who don’t do regular cake/chocolate (I am still not sure that is at all normal…lol. But I have several friends whose kids do not eat cake or chocolate.) One of my kiddos is a real vanilla lover so I figured she would enjoy it. She did. It is such a smooth dessert with a good crunch from those cookies. It tastes better after it sits for a few hours in the fridge. So if you have never made dirt cake, here is your chance. It is a breeze to whip up and it makes a good bit! You can serve a bunch of party goers when this dessert. Whip up a batch today!!

In a large mixing bowl, or the bowl of your standing mixer, add your softened cream cheese and cool whip. Mix until well combined. Now add the pudding mix and a little of the milk at the time, mixing after each addition (trust me it will slosh all over the place if you add it all at once). Mix until smooth and well blended.

Ok now for the fun part! We are gonna crush some Oreos! It’s a mini arm workout and an aggression reliever at the same time. Not that I have any er aggression. No, not me. I have 4 kids between the ages of 6 and 11 but I am as a calm as can be. If you know me well you know I am lying, but if you believe me then let’s just continue that for now. 😜
Add a package of Oreos to a gallon size ziploc. Close tightly. Take a rolling pin or a hammer and get after crushing those Oreos. It’s good fun! Flip the bag over and crush some more. Do the same thing for the second package.

Now, I made this in a trifle bowl. If you don’t have one, you can buy one as they are pretty cheap and you will get some good use out of it, or you can use a plain ole big bowl. Whatever you want. Do your thing.
Add half of the first bag of crushed Oreos (or 1/4 of the crushed Oreos) to the bottom of your serving bowl. Now, smooth 1/4 of the pudding mixture over the top of the Oreos. Now, sprinkle the other half of the first package of the crushed Oreos over this. Then another 1/4 of the pudding. Continue 2 more times. Oreos then pudding. You should end with crushed Oreos on the top. It should look like this…