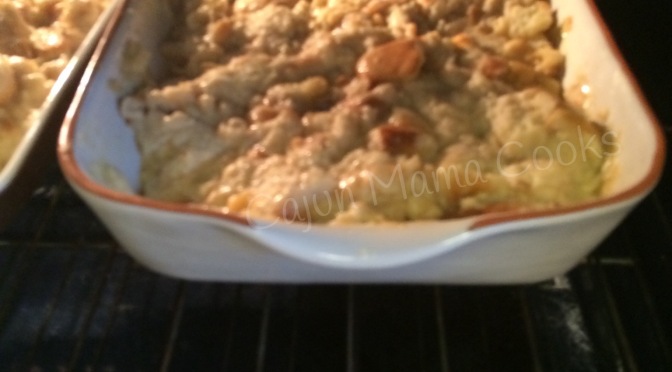 So more than a few years ago, Big Daddy introduced me to his mama’s posse of Broussard/Youngsville friends. You see, Big Papa used to run coops and after they left the Bayou Rapides coop, he was moved to the coop in Youngsville. Now, I had met Mrs. Linda and Mrs. Sandra and Mrs. Peggy (the Broussard posse) but when Big Daddy and I started dating, they kind of took me under their wing and told me all the things that Mrs. Dianne would have told me. For instance, Big Daddy’s favorite dessert since childhood (banana bars…recipe will come), memories from his years in Broussard and so on. They kind of filled in the gaps because though I had always known him, I had missed out on his day to day life and some things a mama only knows…well her and her posse. Mrs. Linda taught me how to make sausage gravy for Big daddy’s biscuits, Mrs. Sandra taught me all about jelly roll pans and banana bars, so on and so forth. They are some lovely ladies but that comes as no surprise. Mrs. Dianne was a pretty fabulous lady herself and was smart enough to surround herself with equally fabulous friends. My mama is one of them…so it’s only fair to say. She also had her Keithville posse…the woman had some good friends. So one day as we are discussing recipes, Mrs. Sandra whips out this recipe for bread pudding. It comes from Pascal’s Manal Restaurant in Nola. I have never been there and I cannot remember if Mrs. Sandra had but she raved about this bread pudding and it sounded just fine to me. At this point I was in college and I fail to remember if I summoned the courage to try to make it (I think I did) but several years later when I started preparing Christmas dinner, I made this for dessert. It is a sumptuous dessert worthy of a holiday meal. It draws oohs and aahs and will make you a star. Well maybe not a star but you will be loved by your family even more than before. That’s never bad. Even my friend Tim who I say is fairly hard to impress could not resist this bread pudding. It’s pretty dang fabulous. It does make a quite a bit of bread pudding, but if you are making it for a holiday meal, I promise it will not go to waste. The recipe is not hard but it requires large amounts of staple ingredients. That’s the beauty of it…it is so simple and requires basic ingredients and turns them into this out of this world dessert. You’ll see. 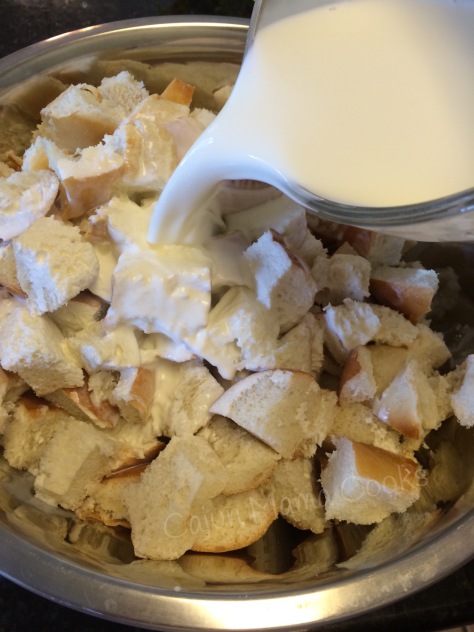 Add the remaining ingredients to the bowl.

Mix with your hands until blended. Pour into baking pan (not greased). I use two 9 x 13 baking dishes as I do not have a baking dish big enough to hold all this deliciousness. Bake for 45 minutes to an hour or until the bread pudding is no longer soupy in the middle. 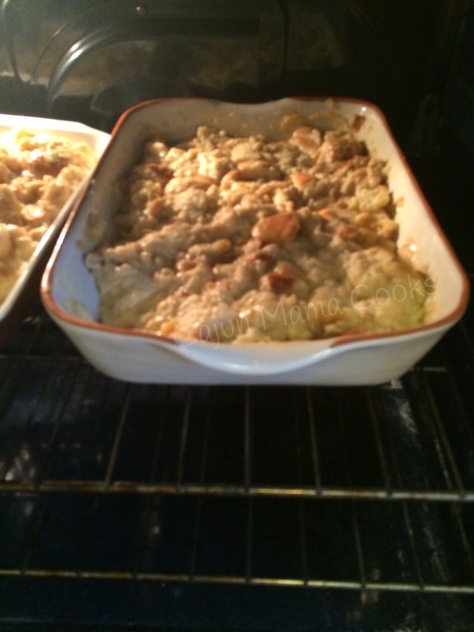 Add butter and remaining ingredients to a large mixing bowl or the bowl of your standing mixer. Mix until smooth. Pour over bread pudding. *side note…big daddy likes his brandy butter sauce melted a little before pouring. If the bread pudding is warm enough it will melt the topping quite nicely for you. So delicious ya’ll. Just. So. Delicious.