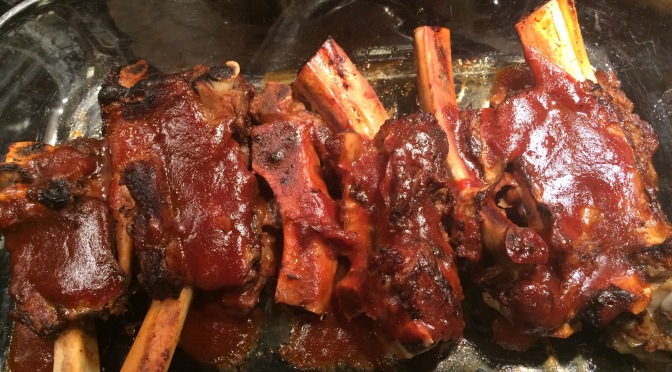 So this is what I have to say about these ribs…the crockpot method worked really well. They were so fall off the bone tender it was crazy. Truly fabulous. I stuck them under the broiler for about 5 minutes after dousing them with our favorite barbecue sauce. That kind of caramelized them a bit. Now I bought beef ribs and I am not sure that was the best decision. They had an awful lot of fat on them and cooked down to almost nothing. The meat that was on there was so tender and tasty, but Big Daddy said it was like a game of hide and seek to find meat vs. fat. So next time I will be buying pork ribs. Likely country style spare ribs since you have to cut them up to fit them in the crock pot anyway. Those come separated and it will cut down on cook time. That leads me to another thing…I will use my bigger crockpot next time and double the ribs. But remember we have 6 people in our family and even my picky kid loved these ribs. So that’s my take. It was pretty awesome to have ribs ready in the crockpot and with some tweaking this will be a great day recipe. So day one of crazy crockpot week in my kitchen was a semi success. But most of all…people were fed. That’s what really counts.~AMB

Again, I would use a 5-6 quart slow cooker even if you don’t double the recipe. The ribs are a little bulky and hard to fit in there even when cut up some. But use your judgement. Cut ribs to fit into crockpot. Pour water and cooking sherry into crockpot. Lay ribs in slow cooker. Sprinkle adequately with salt and pepper. Pour barbecue sauce over the ribs. Cook on low for about 7 hours. The meat will be falling off the bone when they are done. When they were tender, I removed them from the slow cooker with a pair of tongs and laid them in a 9 x 13 baking dish and the smothered them in our favorite barbecue sauce. Clay’s daddy (Big Papa) has a friend who makes some barbecue sauce that is out of this world. It’s a thinner tangier sauce which is what we love. Anyway, put under broiler on lo for about 5 minutes or so to give them a nice caramelized look. Delicious! Three cheers for ribs on Monday night. Yum! 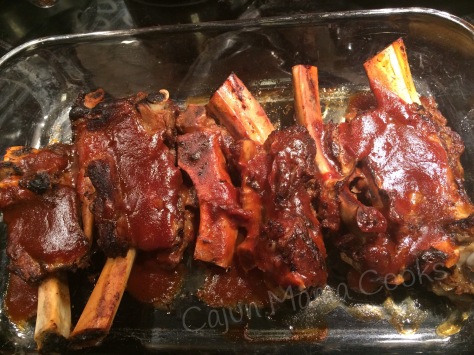 cannot wait until next time